Home » How it all began

‘Children need good food and fresh air for their physical health, a good education by quality teachers and I want to give them the hope in Christ that I have.’’ 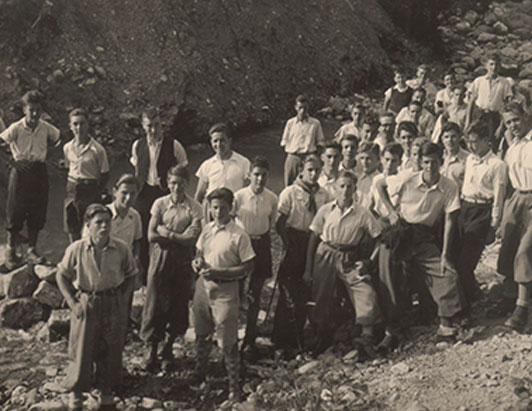 When World War II left countless European orphans in its wake, a Swiss businessman rose to the challenge. In 1948, Jean André brought the first group of 120 German children to Switzerland. Half of them stayed at Jura-Rosaly, one of the first GWI homes in Switzerland. The other half lived with families in the nearby village. Here they were fed, cared for, and learned about God’s love for them. After a few months, they returned to their homelands refreshed, and better equipped to grow up and become all God wanted them to be.

Jean André devoted much time and energy to this ministry, along with carrying out his leadership responsibilities for the international grain shipping company. Because his work took him through Europe, he saw the severity and impact the war had on children throughout the continent.  In addition to German orphans, children from other countries such as, France, Greece, Austria, the UK and Spain were also invited to Switzerland to recover from the trauma they had experienced.

By the late 1960’s, not only had the grain shipping business grown internationally, but Grain of Wheat’s ministry had grown along with it and expanded to Argentina in 1974. It was here that Jean André’s dream for local churches to have a beautiful place to hold youth and children’s activities became a reality, when he purchased property an hour’s drive from the center of Buenos Aires. Over the years, this 172-acre park has grown into a major event center, where thousands gather for camps,  sports competitions, music festivals, and other events.

In the eighties, the founder appointed his son-in-law, André Richir, as director of Grain of Wheat. A period of expansion started and children from British miner families, from Poland, Hungary, Romania and war-torn Lebanon were also invited to Switzerland. Soon after the Iron Curtain fell in 1991, groups of Russian children also started to come to camps in Switzerland. The need was felt to not only organize camps for short periods but also arrange follow ups in the countries of the children’s origin.

Connections were then established with people in Russia and Lebanon who, like Jean André, had a passion for helping disadvantaged children. Instead of bringing the children to Switzerland, Grain of Wheat changed its approach and began organizing local camps within each country and provided training for local Christians. Offices were opened in Beirut and Moscow, furthering the work of Grain of Wheat in Eastern Europe and regions of the Middle East.

In the late nineties, André Richir handed over the leadership responsibilities for the international organization to the founder’s daughter, Anne-Christine Bataillard. Under her leadership, the focus of obtaining funds for Grain of Wheat shifted from relying on the family business, to involving large donors. This required more structure and the need to establish national boards. Our missionary focus slightly shifted during these years as well. Instead of just sending kids home after camp, there was now an emphasis on follow-up and making disciples.

After 15 years at the helm of Grain of Wheat International, Anne-Christine turned this responsibility over to Jean-Pascal Richir, a grandson of the founder. Today, Rob Hondsmerk from The Netherlands, is guiding the ministry into a new era.

In 2018, Grain of Wheat celebrated seventy years of ministry. All these years later, Jean André’s vision is still alive and going strong, as we now nurture and reach out to children in 22 nations around the world, half of whom are Muslim.

From humble beginnings, Grain of Wheat has become a worldwide network and

powerful advocate for children’s ministry. But one thing has remained constant, from Albania to Argentina, from Syria to Kazakhstan, from Russia to South-East Asia, every child counts.

Through long-established relationships with local churches we have been able to provide a continuum of ministry to children and provide long-term stability to ministries we serve on the frontlines.

From it’s humble beginnings more than 70 years ago, Grain of Wheat has grown and developed into a thriving ministry that now reaches children in 22 nations, but the one thing that has always remained the same, is that every child counts!